There is no live and let live with the left; you either comply with what they want or they will destroy you.  This was made loud and clear when Peter Vlaming, a Virginia high school teacher, was fired for refusing to use a transgender student’s new pronouns.

Vlaming, who had taught at the school for almost seven years after spending more than a decade in France, told his superiors his Christian faith did not allow him to use male pronouns for a biologically female student – one he had previously taught when she identified as female.  He did, however, agree to uset he student’s new male name, and simply avoided using the pronouns he, him, she, her when referring to the student.

The student reportedly complained, however, claiming she felt uncomfortable and targeted with Vlaming’s refusal to use the preferred pronouns.  Thus, the school board made a unanimous 5-0 decision to terminate his employment due to “insubordination” and repeated refusal to comply with directives made to him by multiple WPPS administrators.

The school district’s nondiscrimination policies reportedly include gender identity protections but no specific regulations on the use of pronouns. Vlaming’s attorney also said the teacher has Constitutional rights – even though he is a public employee.

Speaking on his own behalf in the hearing:

My religious faith dictates that I am to love and respect everyone, whether I agree with them or not. Because we are all made in God’s image, I am also aware of, and agree, with speech limits that are placed on public school teachers, concerning matters of religious faith. I represent the state in my role as a public school teacher and therefore speak with a certain authority. That authority is not to be used to promote any one specific worldview, and I don’t. However, we are here today because a specific worldview is being imposed upon me.

‘I am being punished for what I haven’t said.’ 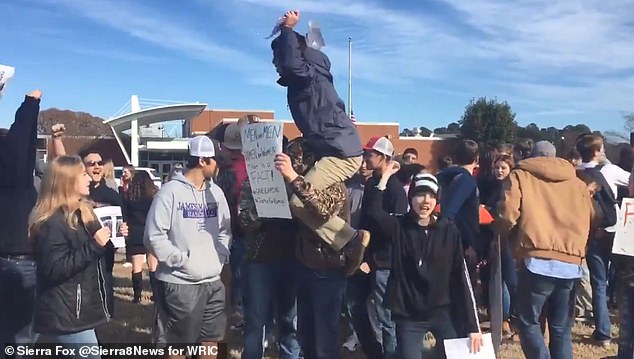 A small group of students outside of West Point High School chanted, ‘Vlaming!’ repeatedly on Friday, during their walkout in protest over his firing. Forrest Rohde, the West Point High School junior who organized the walkout, emphasized that the protest was not about the transgender student. Rather, he said students took issue with the school board “trying to force the teacher to conform to their ideologies with the threat of removal from the school.”

Meanwhile, a GoFundMe page has been set up to help Vlaming cover legal fees and provide for his family. With four children under the age of 10, Vlaming was the only source of income for his family.

For decades the ACLU and allied groups fought to get Christian prayer out of American public schools. They were successful. But now prayer is coming back into the schools, and as long as it’s Islamic prayer, it seems to be fine with everyone. This does, however, reinforce the principle of Sharia that Muslims have rights […]

Richard Carranza a superintendent in Houston Texas originally from San Francisco wants to make a LGBT program in schools. Another radical liberal agenda thats trying to be forced onto the public. HOUSTON, Texas, June 26, 2017 (LifeSiteNews) – A group of Texas pastors said “no” to the school superintendent after he suggested adding an LGBT […]

What is one reason these murderous individuals choose a school to shoot up? Schools are gun-free zones, is why. Gun-free school zones are ineffective. They make people less safe by inviting criminals to come in and kill as many people as they can without anyone shooting back. How come you never see a sign in […]